As a doctor and menopause specialist, I'm sticking with HRT.

For at least six months, I’d been feeling uncommonly irritable. I was tired, fed up and more or less ready to throttle my poor husband, simply because his breathing annoyed me. My joints were sore and stiff, I had given up yoga and I kept waking up in the night. I feared there was something seriously wrong with me - possibly a cancer of some kind.

Although I was in my mid-40s, what hadn’t at that stage occurred to me was that all of my symptoms were perimenopausal, in fact. Once I had made the connection, I started taking hormone replacement therapy (HRT) in the hope it would bring me relief. And it did. In common with all of my patients, HRT made me feel so much better. It made me feel more like myself again and gave me back my pleasures in life.

However, in 2016, a new study suggested that women who took HRT were almost three times as likely to get breast cancer. I read it in the news and panicked; my first thought was that I needed to come off the treatment straight away.

Then I took a step back. Did I really need to give up something that was keeping me sane, allowing me to work and to live and enjoy life as before? Instead, I read the study carefully, took advice from people in the know, and discovered the new research did not tell us anything we did not already know about the risks.

Now, here we are again, three years on, with new research by Oxford University telling us this week that HRT raises the breast cancer risk by a third. The study, published in The Lancet, reviewed all the data on HRT and cancer worldwide and concluded that while the general risk of breast cancer for women aged 50 to 69 who have not taken HRT is 6.3 per cent, those on oestrogen plus daily progestogen - the most common form - for five years have an 8.3 per cent risk. The scientists even believe around one in 20 cases of breast cancer in the UK are due to HRT.

But alarm is a natural reaction when you hear the words "breast cancer" in the same sentence as HRT, and my fear is that the headlines, and not the drugs themselves, will impact negatively on women’s health. I fear women will decide to come off HRT, or not to even start it in the first place. That would indeed be detrimental to the health of so many.

I don’t feel alarmed by the findings. They arise from an epidemiological study looking at numerous other studies undertaken in the past. It is not a randomised controlled  study, which is the gold standard study to demonstrate cause and effect.  There are so many different reasons why women develop breast cancer – which affects around one in seven women in the UK – and often not one single cause. Obesity, not exercising and drinking alcohol are all independent risk factors for developing breast cancer in the future. I personally don’t drink and don’t smoke. I lead an active life made possible by my HRT, so who’s to say if indeed I really am at a greater risk?

Numerous women I talk to in my menopause clinic tell me they have put on weight, due to both the metabolic changes that occur during the perimenopause and menopause, and also due to eating the wrong types of food (often women "comfort" eat to try and improve how they feel). Many admit they have had to stop exercising as their motivation is low, their energy levels reduced and their joints are stiff and sore. (All of which symptoms are very common perimenopausal and menopausal ones.) They repeatedly tell me they are drinking more alcohol to "numb" their symptoms and to try and help them sleep.

This means there are thousands (millions even) of women who are increasing their future risk of breast cancer by these lifestyle changes, often without realising it. Yet they are too scared to take HRT due to the perceived risks.

HRT is not just about breast cancer risk in any case. Numerous good quality studies have shown that women who take HRT have a lower future risk of heart disease, osteoporosis, osteoarthritis, type 2 diabetes, depression, bowel cancer and dementia.  All these diseases increase in women who have gone through the menopause and have low hormone levels in their bodies. Women are seven times more likely to die from heart disease than from breast cancer.

The women I see at my clinic are constantly thanking me for "giving their lives back", their mood, concentration, energy, wellbeing and enjoyment of daily activities having improved on the treatment. Many I speak to have been promoted at work rather than giving it up; they have found new partners or restarted loving their current ones again; they can exercise so much more easily.

I have seen so many women who have been suicidal due to menopause (the hormones estrogen and testosterone are often very important in our brains). They now feel happy and suffer no symptoms of depression, having started HRT.

What really should worry us is that although every woman will go through the menopause at some point, healthcare professionals still have no mandatory training in it. I personally received very little formal menopause training as either an undergraduate or postgraduate.

This lack of understanding among practitioners can lead to confusing mixed messages for women who want to make an informed choice. It means many medical professionals will be feeling just as confused and uncertain about the most recent research as are the patients themselves.

In our menopause and wellbeing centre in Stratford Upon Avon, we hear thousands of menopausal women’s stories, about how they have been misdiagnosed with fibromyalgia from rheumatologists, migraines from neurologists, depression from psychiatrists, palpitations from cardiologists and bladder infections from urologists. None of these many doctors they have seen have spoken about their menopause and how HRT could improve their countless symptoms as well as improve their future health.

I really worry that news stories such as this one will lead to healthcare professionals becoming even more scared of HRT. What they need is good quality menopause education throughout their medical and specialist training, supported by robust trials – something we are hoping to bring about with Diane Danzebrink’s relentless #makemenopausematter campaign. They need to be given more confidence in prescribing body identical HRT which, for the large majority of women, is safe, effective and also cost-effective to the NHS and economy. It brings down the sums spent on osteoporosis and hip fractures, and reduces the wasted referrals, not to mention the time women take off work due to menopausal symptoms.

We must empower women with the right information so they can make the right choices. Everything in life carries some degree of risk. I wouldn’t get behind the wheel of my car if I wanted to fully guarantee my safety. But making informed decisions means asking ourselves truthfully if the bad really does outweigh the good from any course of action.

My own choice on the matter is clear: I’ve been taking HRT for three years now, and despite the scary-sounding headlines, I’ll not be quitting it any time soon.

Newson Health Menopause and Wellbeing Centre was launched in 2018 by leading menopause specialist and GP, Dr Louise Newson. Created to help women receive the most appropriate, individualised and holistic treatment for their perimenopause and menopause, it has quickly become a centre of excellence, providing care to women of all ages, both via remote consultations and in-person at clinics in Stratford-upon-Avon and Warwickshire. 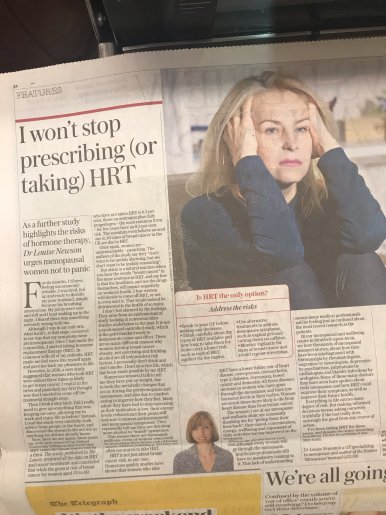