Why are doctors denying women HRT?

In this hard-hitting article for the Daily Mail, menopause expert, Dr Louise Newson examines reports that doctors are refusing to prescribe HRT and explains the benefits and risks of treatment.

Why are doctors denying women HRT?

LAST WEEK, a new client wept in front of me as she described the hellish existence she said she’d been enduring for the last two years. Suzan had quit her job, given up on her relationship and admitted she now spent most afternoons asleep on the sofa.

She was convinced her problems, which included overwhelming fatigue, anxiety and low libido, were due to the menopause, but her GP disagreed. Diagnosing her with depression, he had medicated her accordingly.

‘I am depressed,’ Suzan, who’s 52, wailed. ‘Who wouldn’t be if their life had fallen apart the way mine has? But that’s only because of the way the menopause is making me feel.’

She said her doctor had refused her HRT, citing outdated scare stories of an increased risk of breast and ovarian cancer. ‘He insisted I’d have to brave it out,’ she told me. ‘And said that the antidepressants he prescribed would probably help.’

Suzan didn’t need anti-depressants; she needed a prescription for HRT. And that’s precisely what she was holding when she walked out of my clinic. That she’d had to travel all the way from Scotland to my private consulting rooms in Stratford to get that is nothing less than a travesty.

Her doctor had deprived her of medication that would have cost the NHS just £4 a month, and that has the power to give this woman her life back. And all because he wasn’t clued up on the menopause – a condition that every woman in his practice will experience sooner or later.

I wish I could say that Suzan was an unusual case, but sadly she is typical of so many of the women who seek me out for treatment that will help them cope with the menopausal symptoms that are destroying their lives.

And that’s no exaggeration.

I see women week in and out who, like Suzan, have given up their careers because their menopausal brains feel so befuddled they can’t trust themselves to make the right decisions at work. Some have memory loss problems so severe they honestly believe they might have dementia – in some cases their doctors think so too and send them for tests.

Many are struggling to maintain their relationships, because they’re permanently short-tempered with their partners and have zero sex drive. They can’t sleep, they’ve gained weight and they feel permanently anxious – basically they don’t recognize themselves any more.

And the answer to all this is staring GPs in the face: HRT. This isthe most effective treatment available when it comes to relieving hot flushes, night sweats, mood swings and the bladder problems menopausal women can be plagued with.

Taking HRT is simply replacing hormones – in a similar way we prescribe thyroxine for women with an underactive thyroid gland.

Research has also shown it can actually lower future risk of heart disease (including heart attacks), osteoporosis, type 2 diabetes, osteoporosis and dementia. All these common conditions are costing the NHS billions of pounds.

So why on earth are women being denied this treatment, when it’s clearly so cheap and effective?

The crux of the problem lies with data released from the Women’s Health Initiative (WHI) study back in 2002, which was misinterpreted and yet is still often quoted in the media.

This American study was undertaken to look at the risks and benefits of older women taking HRT. With those taking part having an average age of 63, their results didn’t reflect the risks for women in their 50s, which is when most of experience menopause.

They were also using an old type of HRT that we don’t usually prescribe now. What’s more, many of the women in this study were overweight or obese and also had heart disease, which pre-disposed them to problems.

The WHI claimed that hormone replacement increased the risk of heart problems, but the when the data was analysed properly the results revealed that the risk of heart disease only occurred only among women who were in their 70s and older.

And actually, this study, and subsequent research, has shown that women starting HRT in the first 10 years following their menopause reduce their risk of a heart attack by around 50% - that’s more effective than treatment with statins or blood pressure lowering drugs.

The other concern so many women and healthcare professionals have about HRT is the breast cancer risk. The reported increased risk of breast cancer supposedly discovered by the WHI was so low as not to be statistically significant.

Other studies have shown that women do not have a greater risk of breast cancer when they take oestrogen with the newer “body identical” progesterone that’s usually available on the NHS.

Meanwhile, there are many other factors that pose a greater risk for developing breast cancer than HRT: being overweight, not exercising and drinking a moderate amount of alcohol, for example.

There are also several circumstances in which any increased risk of breast cancer doesn’t apply at all, such as women who have undergone a hysterectomy and therefore take oestrogen only hormone replacement therapy and women under the age of 45 who have had an early menopause.

Today, doctors continue to be fixated by the idea that HRT, cancer, blood clots and heart problems go hand in hand. And that’s despite the fact that we’ve had several studies published since 2002 that have debunked so many of the issues the WHI study appeared to raise.

Indeed, in 2015, NICE published the first The National Institute for Health and Care Excellence (NICE) guidelines on menopause, clearly stating that for the majority of women the benefits of taking HRT outweigh any risks.

They state that antidepressants should not be given to women for the low mood associated with the menopause, as there is no evidence to support their use in this way. They are also clear that oestrogen through the skin (as a patch or gel) is not associated with an increased risk of clot.

With such clear indicators that HRT can be a good choice for so many women, it’s astonishing that so many GPs – and their patients – remain fearful of it.

Clearly, we need improved menopause education for the medical staff certain to encounter menopausal women throughout their careers – so that’s doctors, nurses and pharmacists. I’m one of the directors of Primary Care Women’s Health Forum, a charity that helps healthcare professionals better understand the needs of their female patients.

I also lecture at the Royal College of GPs and provide e-learning sessions for doctors. I can relate to them because I used to be a GP myself – which means I totally get how difficult it is to assess someone’s needs when you’re so limited to a 10-minute consultation.

And it’s great to be able to help bring their understanding of HRT up to date, because so many qualified in an era where HRT was demonized and as a result they still don’t have the confidence to prescribe it.

Meanwhile, too many women reach menopause with very little understanding of what’s happening to their own bodies. My teenage children get extensive sex education lessons at school – they learn all about periods and sexually transmitted diseases.

But the only insight they’re given on the menopause is simply that this is when a woman’s periods stop – if only it really were as simple as that.

I’m not going to claim that HRT is a panacea for every woman’s every menopausal symptom. Some don’t want to take it and others can’t usually have HRT because of medical reasons, for example women who have had an oestrogen receptor positive breast cancer in the past.

But for women like Suzan, and so many more of my patients, a prescription for HRT can give them their life back.

Just as countless women have sat and sobbed in despair in my office, many more have returned a few months later and wept with relief and joy that they feel well again. The tragedy of that being that their own GPs didn’t have a true understanding of HRT and how it could have helped them in the first place.

Newson Health Menopause and Wellbeing Centre was launched in 2018 by leading menopause specialist and GP, Dr Louise Newson. Created to help women receive the most appropriate, individualised and holistic treatment for their perimenopause and menopause, it has quickly become a centre of excellence, providing care to women of all ages, both via remote consultations and in-person at clinics in Stratford-upon-Avon and Warwickshire. 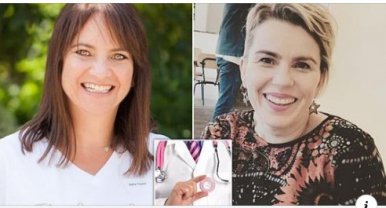